By default, Honey runs in static mode. The static mode suppose that the entire dataset can be loaded in memory. This does not have any impact on the results of the program, but this allow Honey and some of its function to be executed more efficiently. When a honey program is executed in static mode, each function is executed entirely (i.e. on all the records) before the next functions. Functions are executed in a topological ordering of the functions: If a first function requires the result of a second function, this second function will be executed after the first one. However, if two function are independent, they can be executed in any orders. In addition, since Honey knows the interdependence between functions, intermediate results are only kept in memory until Honey know their will not be used any more.

The mode of execution can be specified in the program with the @mode command, or using the --mode command line option.

The following example generates every 0.1 second a random record with a value uniformly sampled between 0 and 1. The program also wait for the user to type commands on the console. If the user type "plot", the programs emits a sound a save a scatter plot of the random signal.

Note that while that the current version of Honey does not run on multi-threads (this will be added in a future version).

As you can see on the previous section, Honey can be used to process real time online stream of data. In this section, and in the following video, we will see how to connect a third party program that generates signal, honey to processed this signal, and Event Viewer to visualise this signal (and the processed features) in real time.

This example illustrates how you can use Honey and Event Viewer on realtime scenario. The only requirment is for the input (and eventually control) data to be streamed in .evt format (e.g. "{time} {channel name} {value}"). This format is simple enought so that it can be generated in any language very easily (e.g. cout << evt.time << " " << evt.name << " " << evt.value << endl; in C++).

The Bash should be started first (it will call the Python script), followed by the Honey program, followed by Event Viewer. To connect Event Viewer to the server, right click on the preconfigured "Connection" component, and select "Start". By default, Event Viewer will not "follow" the signal. You can enable it by clicking on "Display/Follow signal". Finally, the display window of Event Viewer might be to large (or to small when you start it). The easied solution to adjust the window is to use to well so to configure to display to cover around a minute of signal.

Here is a screen shot of what you should see in Event Viewer after a couple of seconds. 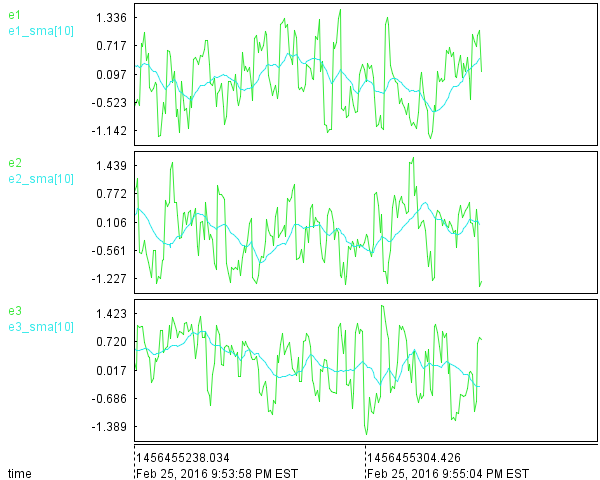 The following example shows the definition and use of a function.

return outside of a function body has a different signification, and it is only used for the Honey API.

When compiled, functions are integrated into the flow network without overload.

Here is an example of use of global.

It is often a good idea to organize complex programs into several files. You can use the command include to include a source file into another one.

With the use of user defined functions, Honey programs can also contain recursion in their definition (i.e. a function calling itself). Such Honey program is called "definition recursive" programs.

Note that a "flow recursive" is necessarily "definition recursive". And vice versa.

We can imagine several programs that would produce this result: